The La Violetta wines offer power and precision, and drinkability in spades. Grapes are sourced from established vineyards from around the Great Southern region, and AJ plays a big part in overseeing the management of the vines, ensuring vine health and optimum ripeness.

All the wines are fermented spontaneously, and whilst none are filtered, some undergo a light fining. They are wines of presence and impact, but also of finesse and verve. 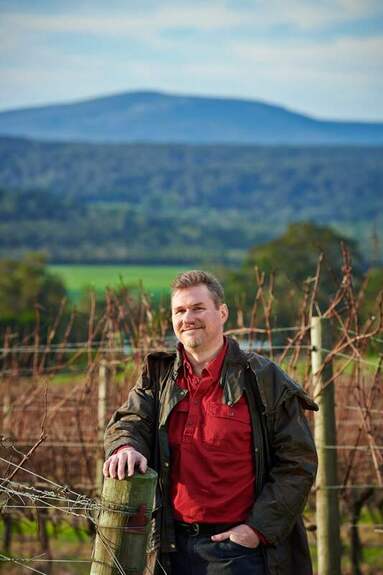 The following wines are currently available :

Pet Nat Range
2017 Patio Nat (Moscato/Riesling)
This is 'Pét Nat' made from the black-skinned muscat, getting to the heart of this ancient variety and its singular delights. Reminds Andrew of those splendid days he spent shovelling moscato skins in north-west Italy, the delicate, refreshing wines of that region providing a stepping-off point for this more free wheelin’ Aussie backyard expression.
Muscat kicked off the vintage, which came about two weeks early, hand harvesting at the end of January with the industrious gnomes of Geographe’s cool, high Ferguson Valley. Skin contact for 18 hours in the press, before going to tank and old barrels to ferment slow and wild over 6 weeks - then to bottle without fining or filtration, sealing in the last frothy whispers of fermentation. As always, a splash of wild Great Southern riesling went in just before bottling to bring balance and length.

2018 Yé-Yé Blanc Riesling/Viognier/Gewurztraminer
The riesling at the heart of this blend comes from a vineyard 15 km south-west of Mt Barker. It shows loads of pure floral intensity, a conversation starter with the other varieties that contribute aromatic complexity and textural elements: old vine, dry-grown Gewürz and a splash of skin-contact Vermentino from Frankland River. About 20% is fermented in old oak barrels on solids to round out the Riesling linearity with some lees-derived richness, giving context to the structural phenolics. 2018 was a brilliant year for Riesling and other aromatic whites in Great Southern, with the mild season bringing exceptional fruit intensity, purity and drive to the wines.
2020 Yé-Yé Rouge Pinot Noir/Syrah/Tempranillo
​Low yielding clonal Pinot Noir from Denmark makes up the heart of the blend, bringing lifted red fruits, musk and herbal notes, with Syrah contributing spice and structure. Plenty of stalks, whole berries and carbonic in here, all wild fermented, then pressed to oak to complete malolactic fermentation. The Syrah comes from an ironstone gravelly loam site west of Mt Barker; mid-weight, juicy, spicy. A splash of Meunier brings dark-fruited aromatics and a different angle on the palate. Six months in oak and early to bottle keeps the style where I like it - bright, layered, juicy, with some savoury scratch. Unfined. Sulphur dioxide added just before bottling.

2020 Das Sakrileg Riesling
This is a selection of the best barrels from the vintage, sourced from two outstanding Great Southern riesling sites. The 2020 release shows great phenolic presence and depth of savoury characters, with scents reminiscent of quince, sherbet, beeswax and complex characters derived from wild ferment and extended lees contact. On the finely textured palate, citrus-like acidity is tempered by the richness of fermentation in seasoned oak and time on lees. The wine fermented slowly at ambient temperature in a cool cellar and remained on lees in old puncheons for nine months, before racking and bottling without fining or filtration.

2019 Nova Syrova
The wine has a number of different elements, with a lot of whole bunches involved. Whole bunch Pinot Noir left on skins to start wild ferment, before draining off to old oak; whole bunch carbonic Syrah and Garnatxa parcels pressed off to finish ferment in old barriques, and a splash of skin contact Vermentino. The wine is unfined. Sulphur dioxide is added just before bottling.

2017 Tempster Tempranillo
Grapes are sourced from Wilson’s Pool vineyard in Frankland River, where Tempranillo bush vines are perched on the highest slopes, giving a gutsy freshness to the wines. Soils are gravelly ironstone over clay loams.  Hand harvested, destemmed into small open fermenters,   with 20% fermented separately as whole clusters.
All wild ferment, pressed direct to old oak for maloclactic and settling. Unfined, sulphur dioxide was added before bottling.

2016 Bilingue Grenache/Mataro/Shiraz
The second release of Bilingüe, sibling to the more austere, structured Almirante y Obispo. Bilingual, from Latin bilinguis, from bi- ‘having two’ + lingua ‘tongue’).Grenache and Mataro is sourced from two small blocks in Geographe, with a little new clonal shiraz from Frankland contributing lifted red fruits to the savoury/herbal context.Wild fermented, hand plunged in small open vessels, drained to seasoned french oak barrels for twelve months maturation.
2017 Up! Shiraz
Sourced from distinguished sites in Great Southern, on gravelly ironstone loam with granitic sands, delivering the region’s unique characters with remarkable depth and intensity.The 2016 release is a blend of three shiraz vineyards: two in Mt Barker and one in Porongurup. Seven separate small parcels fermented in open vessels for 14-28 days, worked only by hand plunging and barefoot pigeage. Whole clusters were included at around 25% overall. The wine was drained straight to French puncheons and barriques, 25% new, to age for 12 months.
2017 Syrah Soul
Working with trial plantings of new Syrah clones from Wilson’s Pool vineyard in Frankland for a few years now, with exciting results. In 2017  Andrew was offered a small parcel of Syrah from a revered old vine site across the road, planted to the original WA Houghton clone.
Fermentation was in small open vessels, taking a laidback, low extraction approach - hand plunging with some whole bunches in the mix. New and old clones come together in this new release, the first La Violetta Syrah sourced purely from Frankland fruit, bringing depth and soul to the wine, while retaining elegance and spice.

​2011 La Ciornia Shiraz
The inspiration for La Ciornia comes from Andrews time spent working in Barbaresco in 2002 and 2003. The local Piedmontese varieties encompass the extremes of red winemaking, in terms of site expression, colour, tannin, aromatics, acidity and using oxygen constructively. Also, being an important culinary centre, most often the focus is on how the wines will function in context with food – rather than aiming simply for maximum ripeness or extraction. When Andrew first came to Great Southern and tasted the shiraz in barrel, he immediately wanted to see what could  be done with that fruit, aiming for a slightly divergent style – a shiraz that my Piedmontese friends would love to drink – relatively strict and unadorned, expressing the site character.