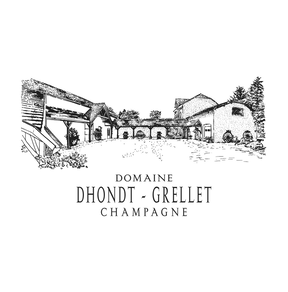 One of the most exciting emerging talents of the Côte de Blancs is Adrien Dhondt, born in 1991, whose cellars are located in the sleepy village of Flavigny, a mere four-minute drive from more-glamorous Avize. This small estate came into being in 1986, when Adrien’s father, Éric Dhondt, married his mother, Édith Grellet. The Dhondts were Belgian farmers in origin, and Adrien's grandfather had purchased vines in the Sézannais in the 1960s; the Grellets, by contrast, are natives of Cuis and Cramant. Amounting to a mere two hectares on its inception, today the domaine has tripled in size; and the vinous, intensely characterful Champagnes that Adrien has been producing since he took the reins a decade ago seem set to win the estate a celebrity disproportionate to its modest scale.

An autodidact whose methods are informed by his own experiments and the work of vignerons he admires in Burgundy and Champagne, Adrien Dhondt believes in living soils, practicing what he calls “peasant viticulture.” While he has thus far eschewed organic certification, he employs no synthetic products of any kind, cultivating his soils and periodically enriching them with homemade compost. In the vines, there’s a lot of manual work: Dhondt prunes short and debuds severely to limit yields and produce ripe, concentrated fruit at harvest time, a commitment that’s immediately evident in the glass.

In the cellar, Dhondt is a partisan of barrel fermentation with ambient yeasts, filling his fûts after a very short six hours’ settling (or débourbage) and adding minimal sulfur dioxide. His cellar isn’t air-conditioned, so it fluctuates in temperature throughout the year, tracking the seasons; and the vins clairs spend eight months on the lees before tirage without cold stabilization, filtering or fining. During those eight months of élevage, the wines are topped up when Dhondt deems it judicious, “about every month and a half, I’d say, but I decide whether to top up—and whether to perform bâtonnage—by tasting.”

The Dhondt family have worked with a perpetual reserve since they began estate bottling in 1986. After drawing off 30% of his reserves for the new year’s tirage, Adrien replenishes the loss with wine kept back from the new vintage and racks the resulting blend to barrel—accompanied by the fresh lees of the latest vintage—in May. Come harvest time, when empty barrels are needed, the perpetual reserve is returned to tank. Each year, the process is repeated, ensuring the domaine’s barrels are never empty.

The influence of Burgundy is palpable in the wines’ texture and vinosity, and it is both direct—Dhondt cites Coche-Dury, Vincent Dancer and Jean-Yves Bizot among his inspirations—and also mediated by his neighbor Anselme Selosse. Indeed, Dhondt readily testifies to Selosse’s importance in his journey as a winegrower. “Anselme has influenced me a lot, because he succeeded in realizing his own conception of wine: whether one likes or dislikes them, his wines are unique in the world. He showed me the path I was looking for,” Dhondt says. And with such a defining figure so close at hand, it is evidence of Dhondt’s potential that his wines, while nodding to Selosse’s, are already very much his own.     Robertparker.com

NV    "Dans un Premier Temps..."    Extra Brut
SEBASTIAN CROWTHER  |  MS
Adrien’s intention with this cuvée is to represent three of the main villages he works with – Sezanne, Cuis, and Avenay Val d’Or. The blend is 50% Chardonnay from Sezanne, 30% Pinot Noir from Avenay Val d’Or and 20% old vine Pinot Meunier from Cuis. The base vintage (2017) makes up 70% of the blend with the remainder a perpetual reserve going back to 1986. Such a wonderful introduction to the range. Citrus, white peach and savoury nutty complexity meet you on the nose. There’s much intensity to the mineral lift too. Very attractive chalk is a welcomed addition. The palate is fine elegant and graceful. Beautifully poised with great fruit concentration. Dosage is 3g/L

NV Les Terres Fines                          1er cru Blanc de Blancs Extra Brut
SEBASTIAN CROWTHER | MS
Coming from nine different plots all from the limestone rich soils of Cuis & Chouilly with an average age of 45 years, Les Terres Fines is a pure expression of Chardonnay. Super open and expressive. Lots of layers and precision. Fine tuned grapefruit and lemon rind that drifts into the stone fruits – white peach. The intense mineral concentration is top shelf. Chalk and layers of it! The palate is a wave of finesse and elegance. Dosage is 2g/L.

NV Cramant                                       Grand Cru Blanc de Blancs Extra Brut
SEBASTIAN CROWTHER | MS
Adrien has worked hard over his time in charge of this estate to make more site specific, terroir driven wines. This Champagne is from fruit sourced exclusively from the Grand Cru village Cramant in the Cote de Blancs. The dial is turned up here. Wonderful depth and concentration. There’s power, but it is all tied up in a bundle of elegance. These Champagne don’t rely on masses of autolistic characters, but on their own natural flavours. Dosage is 3g/l.

2015  Les Nogers                                1er cur Blanc de Blancs Extra Brut
SEBASTIAN CROWTHER | MS
100% Chardonnay. Les Nogers is an evolution from the cuvée Vielles Vignes Selectionnees, which Adrien made for the last time in 2011. Starting with the 2012, Adrien started to bottle the wine under the name of the lieu dit – Les Nogers. Adrien’s parcel in Les Nogers is of old vines, now over 50 years old. A very distinct wine in the range, offering beautiful rich, ripe and intense fruits. Mainly stone fruit with a little tropical edge. There’s a wave of chalk mineral that is ever expansive. The palate is creamy and multidimensional. Supreme length. Dosage is 2.5g/L


2015  Le Mont de Fer Rosé               1er cru Extra Brut
SEBASTIAN CROWTHER | MS
A very special rosé made in tiny amounts. 100% Pinot Noir from old vines located in the Avenay Val d’Or, a village classified as Premier Cru. This is a Rosé de Maceration (Saignée). This brings about a style that is deeper in colour and has greater depth and structure. Deep red fruits of red cherry and raspberry. There an intense backing of spice and mineral. The palate is full, but ever so refreshing. Packed with fruit and secondary characters and very unique wine in the lineup. and Dosage is 3g/L.

2015 Le Bateau Vieilles Vignes       Grand Cru Blanc de Blancs Extra Brut
Champagne Le Bateau is the top wine made at this estate. Le Bateau is on La Bute de Saran and is considered to be the best terroir of Cramant. The soils are clay and limestone soils over a chalk subsoil. The vineyard was planted in 1951 by Adrien's great-grandfather. The Champagne is a Blanc de Blancs grown in the same-name parcel (Lieu-Dit) planted with old vineyards (vieilles vignes), classified as 100% Grand Cru in the renowned Côte des Blancs. Champagne Extra Brut, 1,6 g/l, with a great aging potential. 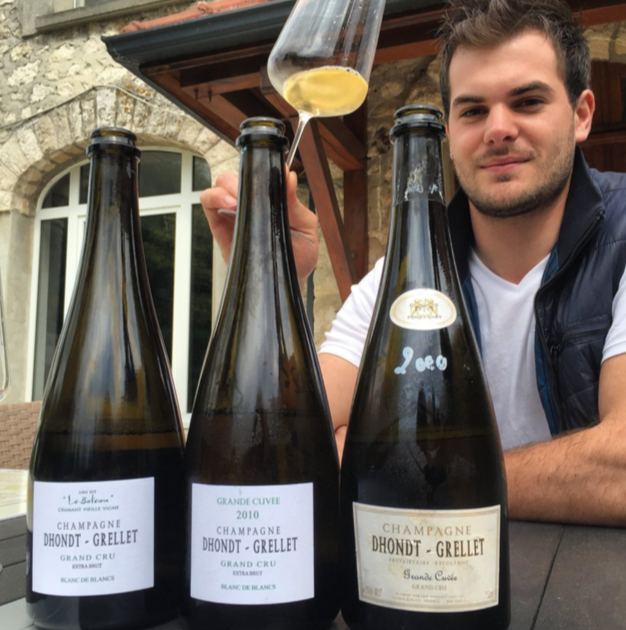 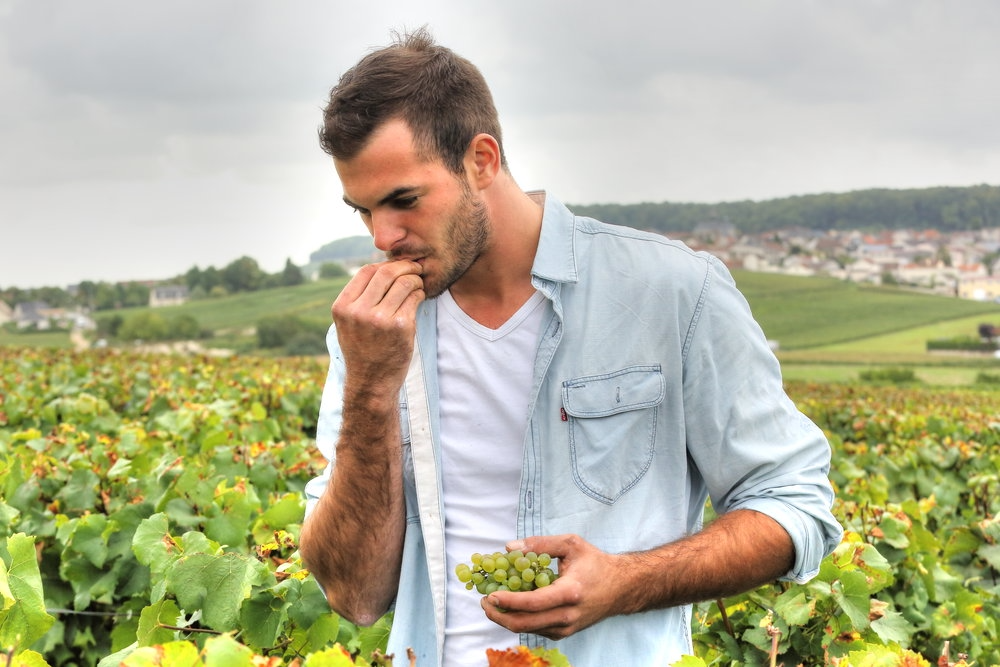