Crawford River was established and planted in 1975 by John and Catherine Thomson, in far south-west Victoria. They were inspired by its potential to produce superior quality grapes after researching & experiencing many grape growing areas of the world. It was a relatively unexplored wine growing region and indeed remains merely a blot on the canvas. Although the area is now known as the GI of Henty.

Presiding over gently undulating grazing lands with sprawling forests in the distance, Crawford River has paved the way for the industry in what is traditionally a wool, beef and dairy region.  The winery atop the hill and the vineyard hugging the slope nestle  in the midst of a large sheep and cattle station that John’s great-grandfather  settled in 1884.

Since the initial plantings in the mid 1970´s, there have been 2 more small plantings.  Believing in the fine quality of the Semillon included in the original plantings, John and Catherine added another 0.7 Ha of the variety in the early 1990´s.

In 2000, another block of Riesling & Cabernet was added, which now produces the Young Vines Riesling & Rose wines. The cool southerly latitude together with the maritime environment, complex soil structure and favourable micro-climate create a terroir which has justified the initial vision.

Belinda Thomson, elder daughter of John and Catherine, returned home at the end of 2004 after completing her studies in Oenology and Viticulture and pursuing several vintages in various European locations.  Between 2008 and 2014, Belinda divided her time between Spain and Australia, returning for the winemaking season each year and the all important blending. As of 2014 she has found her way home to be dedicated full time to the family team.

In August 2010, Fiona Thomson, younger daughter, joined the team in the role of sales and marketing.

2019 Young Vines Riesling  New release
NICK STOCK | JAMESSUCKLING.COM | 93 POINTS
This offers aromas of lime and lemon with attractive pithy and minerally edges. The palate has a fleshy, smooth, white-peach and lemon core with acidity drawing good length. Drink or hold. Screw cap.
​
MIKE BENNIE | THE WINE FRONT | 94 POINTS
It was the summery thirst quencher I couldn’t stop thinking about on the way back from the beach, today. All lemon-lime, sweet green apple, tart acidity, clip of chalky pucker, refreshment factor through the roof, barely there stickiness of Riesling fruit and a faint lick of kero or wet hay or something slightly savoury-waxy. Such a treat. Such a good Riesling.
DOWNLOAD NOTES
2019  Riesling  New release
NICK STOCK | JAMESSUCKLING.COM | 95 POINTS
Very vivid lemon and lime notes with juice, pith and peel, as well as white peach and some gently herbal notes, too. The palate is smoothly refined, seamless and long with interlaced peach and citrus flavors that hold very long. Concentrated fruit drive here.
DOWNLOAD NOTES
2013 Riesling  Museum Release
As seems often to be the case with our aged Riesling, this wine belies its age.  Still tinged with youthful green elements, it is incredibly fresh and bright for its years. Delicate blossom and citrus edges fill the nose, together with a distinct wet stone/mineral quality and white stone fruit nuances.  More citrus follows on the palate, with notes of custard apple and honeydew melon throughout. The beautifully integrated acidity is soft yet present, creating balance and enabling fabulous length.  It’s in a wonderful stage of life.

2010  Riesling Serendipitous Selection   New Release
This wine was such an unanticipated pleasure to make.  Golden to the eye, with tinges of youth, this wine will surely continue to age magnificently. Intoxicating aromas of citrus zest, along with toasted cashew on the nose coupled with scented blossom & minerality.  Citrus is front and centre, kumquat/mandarin with white grape fruit, a hint of yellow stone fruit interwoven through the complex, savoury layered palate. Mineral quality shines throughout, with chalky texture from start to finish helping shape the densely textured palate.  The fine, ever present acidity draws a line from the luscious mid palate to the incredibly persistent finish.

2008  Riesling Reserve
Still fresh and bright, showing hints of pale green belying its age.  Lime curd and notes of red apple together with macadamia nut suggest some maturity, while fresh green melon, oyster shell and floral notes portray the wines youthful elements - which abound.  A delicate, pithy quality on the mid palate helps shape the textural integrity, with bright, beautifully integrated acidity aiding the seamless structure. Portraying generous fruit weight and palate depth, the wine has great drive and definition.  Silky, supple and long this wine has years ahead, though drinks like a dream right now.

2017  Beta  Sauvignon Blanc / Semillon
Macadamia nut, river stone and hints of delicate lime are the invitation to this delicious wine.  A wonderful, fresh opulence is present on the front palate, at once counteracted by a taut, mineral quality and supple, textural layers, enhanced by lees and oak.  It shows terrific balance, defined by seamless natural acid, deft use of oak and superbly integrated lees treatment, all of which lend terrific drinkability and potential for cellaring.  The lovely line of acid is evident throughout the palate and a little air will enhance the complex structure.  Long and even and will no doubt reward some cellaring.  100% Whole bunch pressed to tank with no additions, chilled and racked the next day to barrel. No additions are made to this juice which is left to naturally ferment in its own time.  It spends around 11 months in majority older oak, after which it is blended to tank where it spends another 6 months settling – and perhaps undergoing some malolactic fermentation if it feels like it.  Belinda thinks there is a terrific balance of fruit, texture and oak – which she thinks must be present, without being overt.

2016 Cabernet / Merlot  (70% Cabernet  Sauvignon / 30% Cab Franc / Merlot)
Beautiful concentration of both fruit and tannin is evident in the wines of 2016. Cassis, blood plum and chocolate are all front runners here.  These follow through to the palate  together with some allspice, red fruits and liquorice which all come together to form a delicious, balanced and approachable drink.  Firm, fine fruit tannins sit alongside more structured, judiciously balanced French Oak tannins, helping shape the textural palate.  Fine, natural acidity helps pull all these elements together and solidify its length.  Terrific drinking now, but will no doubt benefit from time.
This wine was destemmed only into open fermenters and cold soaked for about 1 week.  Partially (there was more than 1 fermenter) inoculated with neutral PDM yeast and hand plunged throughout fermentation.  Pressed and racked to tank to undergo Malolactic fermentation prior to being barrelled to 100% French Oak, comprising less than 15% new oak.  It spent 12 months in this wood prior to blending to tank. Settling for 2 months and bottled in October 2017.  Not fined with any agent.  No added acid.  Filtered prior to bottling.

2014 Cabernet Franc
Bright, aromatic notes of raspberries and macerated cherries leap from the glass in this delicious release. These elements are immediately backed up by an amalgam of baking spices and gentle phenolic nuances, collectively creating a harmonious palate with seamless structure and fragrance.  The wine aged for 12 months in pre-used barriques, providing subtle oak characters which further enhance the shape of this delicious, medium bodied wine.  Showing effortless balance and superb texture, the natural acidity helps create a soft finish, lingering in detail where it matters.  Delectable and very limited.  Screwcap.

2014 Cabernet Sauvignon
Rich, black fruit notes and spice underpin the nose of this wine. Underlying this, there are liquorice elements together with dense black cherry and cassis.  The palate provides fabulous, fine tannins throughout.  Chalky texture and robust structure lend generous palate weight, while balanced, all-natural acidity assists with palate length and freshness.  This wine, while a pleasure to drink now, will surely benefit from some years in bottle.
Each individual block was separately hand picked and fermented in open fermenters.  De-stemmed only (no crush). 5-7 day cold soak was carried out prior to fermentation with neutral yeast. The wines were then pressed to tank and settled prior to being racked to barrel for malolactic fermentation.  20% of this Cabernet was left in the fermentation vessel and sealed for a period of extended maceration of 4 weeks prior to pressing.  No additions. No added acid, not fined or cold stabilised.  Coarse filtered to bottle.  Tartrates may have settled, which is a natural and normal process. 2 years in French Oak.

2005 Cabernet Sauvignon  Museum Release  (95% Cabernet Sauvignon, 5% Cabernet Franc & Merlot)
This wine is aging beautifully. Red & black fruits, cedar wood and bay leaf are the predominant characters of this soft, complex wine.  Still fresh and bright, with blackberry and black olive evident throughout the palate along with hints of liquorice.  Integrated acidity aids the well-balanced structure and together with fine grained tannins results in excellent persistence.  Should continue to age gracefully for some time.

2017  Nektar Riesling - Residual Sugar: 152gms
A very elegant expression of our Nektar. A beautiful, fine line of pure citrus elements alongside the typical dried apricot and kumquat marmalade that speak of the natural botrytis present in this wine. Delicate lime flowers, together with lemon curd and subtle, pithy qualities create a divine juxtaposition between sweet and savoury notes, which elicit complexity and sophistication. The varying, unctuous qualities are underpinned by a taut line of acidity which drives the palate, creating freshness and definition, counteracting any potential for cloying on what is a fabulous, long finish.  Superb now, this wine will continue to age for a number of years to come. 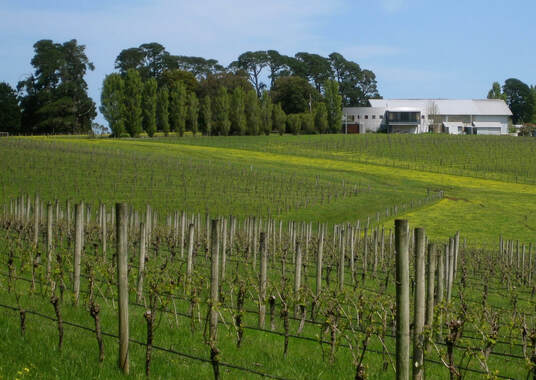